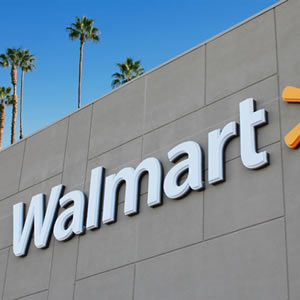 Wal-Mart has announced their latest earnings, they are down and the forecast is not much better. Why is this? Let me give you the view from a Customer’s perspective…

…all I needed was some fishing line, so I did what millions of people do every day to get something they need: I went to my local Wal-Mart. I found the fishing line, got a couple of other things and went to the checkout. I won’t bore you with the whole situation at the checkout, but as an expert on Customer Experience, and an author of four books on the subject I like to think I know a little about how to create a great Customer Experience. To be honest an average Customer Experience would have sufficed but I didn’t even get that. The wait time was horrendous. I complained to the checkout clerk about the time it took to be served. She decided to inflame the situation by being very rude so I asked to talk to a manager. I now understand why the clerk was rude. The manager was worse! After the manager walked away I could hear her complaining about me to a co-worker, in a loud enough voice that she knew I could hear. While I thought about this experience and their awful behavior, I could hear a phone ringing and ringing. I overheard one of the customer service staff say they were not going to answer the phone because it’s “only a Customer” and she was “too busy.”

This experience was a classic case study of how NOT to deal with Customers. As a result I have decided never to go back Wal-Mart. The only good news is I do use this as an example of what not to do in our Customer Experience Management training.

Wal-Mart has been a juggernaut of retail for going on 30 years. The discount prices and large selection are an example by which all other discount retailers are measured. They dominate the marketplace as the Number 1 retailer. They have figures that report that 2/3 of Americans shop at the store every month.

But I have to ask the question, “Is Wal-Mart the store it used to be?” The answer is no.

Wal-Mart’s announcement about their earnings disappointed Wall Street. They are also making cuts to their projections for future quarters. Wal-Mart Chief Financial Officer Charles Holley blames caution at the consumer spending level as the culprit for their problems. I am not convinced by this explanation.

I thought that during a recession low priced stores did better? Their low prices should be a draw not a deterrent. For the very reason that Charles cites as the problem, Wal-Mart should be doing well. I would also point out to Charles that if you provide a poor Customer Experience and people, like me, refuse to go back, your sales decline. Consumers are telling another story about why Wal-Mart is disappointing the stockholders. It seems that my trip was par for the course for many Wal-Mart shoppers. In my case, however, at least the fishing line was there! That’s more than many of these shoppers can say. If you don’t have the items the shoppers need, sales decline.

When I heard this announcement a quick search on the web revealed articles from Bloomberg.com that talk about the Wal-Mart customer experience, using real world examples. There were several stories from real shoppers that gave specific examples of what frustrated them about their experience. I was able to narrow down their complaints into 5 main areas.

When one considers these five complaints, it is clear that the problem is an operational one, not an economic one. Each and every complaint here is the result of a lack of employees, a lack of concern for the customer experience by the employees that are present, and a clear loss of service for the consumer. I wrote a post about this exact point suggesting that an excellent customer experience begins with employee engagement. Happy employees make happy Customers. The ones that work at Wal-Mart are clearly not happy and it shows.

There was a time when Wal-Mart employees were happy. They enjoyed excellent benefits, regular hours, competitive pay and were valued as one of the most important resources at the organization. In the 90’s, their ads were built around employees, featuring them as ambassadors to the public that invited the customer to come in and explore their retail paradise.

Remember those days? But today, you would think that all the associates must be somewhere else because you can be certain that they aren’t at the store helping you find things, putting inventory on the shelves or opening up one of the 27 closed registers while you are waiting in a 15-minute check out line.

Wal-Mart added 455 stores last year, which makes the total number of their stores worldwide at 4055. Their employees, though, have dropped since 2008 by 20,000. (Dudley Par. 5) So not only do they have fewer employees but they also have more stores to spread the employees around!

So the employees left on the job are not ‘happy’. Go onto YouTube and see the videos posted there. Wal-mart employees say they are overworked, they are undertrained, they are constantly behind in their tasks and they have super demanding customers that call on the phone.

It would be relatively inexpensive, according to some experts, for Wal-Mart to add more to their staffing. For a company that made over $17 billion in profit, the costs only add up to $448 million (Dudley Par 17). But earnings are everything, and profits are more important, so unfortunately it doesn’t happen. They may be, in this decision specifically, the quintessential Hungry Hippos that I talk about in my post, ‘A Message to Wall Street’.

Wal-Mart is an excellent case study of when your operation and devotion to making the quarterly earnings report results in decisions that have short-term goals but long-term effects on customer experience. Wal-Mart has long been the leader in retail and is likely not to drop from that spot in the next year. However, if they continue in their course to expand the retail space and not the retail employees, they can definitely expect to earn less than $17 billion next year.

What is your experience with Wal-Mart?