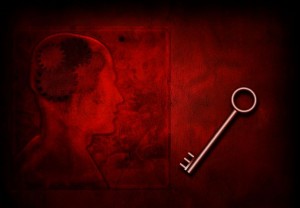 Mention “Freud” and most academics still give a wry smile and members of the general public immediately feel uncomfortable and defensive, because Freud is synonymous with hidden desires and sex! What psychologists and lay people alike forget is that Freud’s ‘big idea’ was that our mental life was split between conscious and unconscious processes. Further, the functional structure of our thinking and feeling could be likened to an ‘iceberg’, with the visible tip above the water, hiding the bulk of the ‘thinking’ machinery below the waves. The tip, of course, is our consciousness, whilst the submerged material is our unconsciousness. In fact Freud was making the claim that for the most part, our lives are under the control of unconscious psychological forces; secret pulls and pushes that automatically affect our thinking, feeling and behaviour, without our conscious realisation. Take a moment to think about what Freud is claiming, it is remarkable and astonishing; put another way, during our waking lives we are scarcely aware of what we are doing or why we are doing it!

Whether we like it or not, the evidence for our unthinking, non-rational, subconsciously-controlled behaviour, has accumulated over the last decade (e.g. Bargh et al, 2002; Williams & Bargh, 2008). It is now becoming widely accepted in Psychology that the traditional model of human beings as sentient and rational is way off the mark. It is a fabrication, a self-generated mirage of what ‘human-beings’ are like. It casts us in a role as some kind of ‘fantasy-being’ generated from Classical Greek propaganda. We see ourselves as descendants of Apollo; who was serene, calm, well-balanced, poised, disciplined and rational. Well, we are not like he was (and perhaps he never was what he was)! Human nature may strive for this ‘ideal’, but at best it exists only as a ‘persona’, a mask, a selective abstraction, which disguises the true complexity of human personality.

Nobel-Prize Winner, Professor Daniel Kahneman has devoted a life-time of research into the way in which we human beings arrive at evaluations and decisions. He has identified two functional mental systems, System 1, which is automatic and fast and effortless, and System 2, which is more considered, slow and effortful to use. In terms of our earlier discussion, System 1 equates with the subconscious and almost instantaneous, intuitive decision-making. System 2 is decision-making that involves conscious processing. A good summary of Kahneman’s theories, condensed into one lecture, is available on You Tube.

This dichotomy or ‘bicamerality’ of the human mind is reflected in the review by Bargh and Chartrand (1999) who again expose the myth of assuming that humans consciously engage in information processing, evaluation and decision-making. The division, whether it be called controlled v. automatic, systematic v. heuristic, explicit v. implicit or conscious v. non-conscious, exists; and the conscious system (Kahneman’s System 2) is slow and takes a lot of effort to use; consequently we only use it sparingly and for most of our waking-lives, we are under the control of an automatic guidance system, the ‘ghost in the mind’, the Freudian non-conscious, that for the most part is unknown and unknowable.

Haidt (2001) even extends this characterisation of automatic control further, arguing that even moral judgements are more ‘pure’ and closer to ‘the truth’ when guided by instinct, intuition and emotion.

The entanglement of characteristics that we call ‘personality’ also contains desires, lust, envies, greed, anger, pride and other non-rational, non- socially-desirable emotions and motivations, (the Freudian ID). It is the heritage of Zeus’s other son, Dionysus,( who is conveniently left un-adopted by Western scholars). This non-rational part of the mind is about abandon, chaos, ecstasy and intoxication! Interestingly, some authors (e.g. Paglia, 1990) have associated Apollonian behaviour with males e.g. rationality, reason, solidity and goal-directedness, whilst females are associated with emotionality, and unconstrained non-rational behaviour.

With the existence of this type of self-delusion and stereotyping, we can perhaps understand why the Western Business-World has a male dominated, ‘scientific’, Weltanschauung. It is rigid, tight-lipped and emotionally controlled. It is almost afraid of emotion and in this suppressed-world of ‘homocracy’; anything challenging the traditional rules, regulations or routines is viewed with suspicion; creativity is seen as ‘abnormal’ and ‘alternative’ thinking deemed a heresy. Organisations have been slow to recognise and more importantly accept the true nature of what being human is. This denial and the misguided blind-faith in control and rationality has led to businesses that are dysfunctional, disliked, demotivating, and stressful for all who have contact with them; managers, employees and most importantly, customers.

This current way of thinking obviously has serious implications for the internal structure, management and direction of companies, but a discussion of these problems and possible solutions are outside the scope of the present article. Here, we will restrict ourselves to considering the market place and how these erroneous assumptions, impacting on marketing and sales, can be overcome.

We now know that consumer behaviour, including decision-making, is the response to ‘thoughtless’ somatic processes, e.g. sympathetic nerve and endocrine systems, which are continuously working in response to environmental stimuli. Consumers are operating under emotional guidance systems and literally act intuitively on ‘gut reactions’. These are triggered through perceptual processes and areas of the brain (e.g. hippocampus) responsible for emotional influences on behaviour.

For the most part we do not know why we have purchased something. If asked, our response will be vague; “I just liked it”, “I thought it was just me” etc. We may even try to rationalise why we bought it; “It was on offer”, “It is a good quality”, “It will last me” etc. Take a moment to consider how useful these responses are for providing insights as to why customers are buying goods and services. One set of information is too general to be useful, whilst the latter ‘rational’ responses are pure fabrication. They are a post-hoc justification of money spent without a good (rational) reason! No one wants to be considered as irrational, and so answers are provided that; satisfy the need for social desirability; fulfil what the researcher wants to hear; and the fit the Apollonian image, Zaltman, 2003.

If marketing and investment decisions are being taken on such spurious data, it is no wonder that between 60 and 80% of new products fail, despite prototypes, focus groups, structured interviews and questionnaires. It is clear that over 90% of our decision-making takes place below the level of consciousness; consumers do not know what they are doing! Companies must be prepared to explore the role that non-conscious processes play in real life in decisions and behaviour of individual consumers, (Bargh, 2002).

The obvious question is: “how can we get at the consumer subconscious, particularly if it is not accessible to the consumer his or herself?

One answer is to measure changes in the sympathetic nervous system semi-directly by monitoring changes in the body’s regulatory system. Typical markers are changes in the rate and depth of breathing, increase or decrease in blood flow at the peripheries of fingers or in the blood vessels in the cheeks, dilation or contraction of the pupils, increased moisture in the palms of the hand and changes in pulse rate. Damasio, (1994), calls these changes “somatic markers”, and they can be used to indicate individuals processing information to make a decision ahead of the awareness of making that decision or the reason for making it, Bechara et al, 1997.

These somatic markers are in another sense a measure of general arousal and emotional response to the individual’s perception of environmental stimuli. And recent research, (e.g. González-Vallejo & Reid, 2006), has shown the link between levels of physiological arousal and what a consumer will buy and how much they will pay for it!

This substantial influence of emotion on consumer decision making has been elegantly demonstrated in a series of experiments by Reid & González-Vallejo, 2009. Together, they offer evidence as to how physiological emotional responses can be combined with symbolic information to predict consumer preferences.

Unfortunately, measuring the arousal levels of consumers has involved fairly invasive methods to collect physiological data. Monitors on the chest, arms, hands and head can provide on-going electronic readings of pulse rate, galvanic skin conductance etc. but to pretend that the measures themselves have no influence on the participants’ behaviour is at best naïve and at its worst an indulgence in self-deception.

A more useful approach to the problem of accessing the subconscious of the consumer seems to be offered by a combination of associative techniques and response time measurements. The word association technique has a long history and is still employed by psychoanalysts to explore the content of the unconscious mind. Part of the association-technique analysis examines the latency of the responses, and with the advent of computers and online engines, the response times can now be measured in terms of milliseconds. It is the development of these two techniques that together offer market researchers the possibility of exploring the subconscious mind of the consumer, and simultaneously uncovering the implicit network of words, concepts and emotions that are associated with brands.

The principle underpinning response-time methodologies is quite straightforward, the quicker the response-time, the stronger or closer the connection, (Marlow, 2012). In marketing terms, if we are considering brands, then the quicker concepts are associated with a particular brand, the more influence those concepts will have on shaping attitudes, emotional responses and behaviour towards that brand. This map of associations is a subconscious mental model of the brand-image held in the mind of the consumer.

NNA allows managers and researchers to fully explore the implicit associations, (attitudes, emotions, behavioural intentions) of a target group of consumers. The story-boards that are produced offer a ‘heuristic’, a detailed overview of how brands are ‘secretly’ perceived. The pictures represents an internal brand-image that is free from any self-presentation biases and offer a rich store of information that can be analysed in more depth for segmented and/or individual variants. These visual solutions are based on response-time metrics and are therefore reliable and robust offering insights into the ‘why’ of consumer behaviour and adding predictive validity to the more traditional explicit measures.

NNA data can be combined with other measures such as demographics, attitudes, purchase intentions; buying history etc. to provide a comprehensive consumer model for the brand-manager.

The site is really just an ‘e-business card’, just to demonstrate the possibilities. Each project would obviously have a bespoke design that might include the client’s own branded website for data collection.

Although NNA is very new, we have already had one successful project, which looked at the relative brand-strengths of companies in the South African Health Insurance market.

The study demonstrated to the client how their brand was perceived as compared with two of their closest competitors. Details of the results are obviously confidential, but suffice to say that ‘the client’ was very pleased with the outcome and able to develop useful strategic future scenarios based upon the ‘emotional signatures’ of the brands.