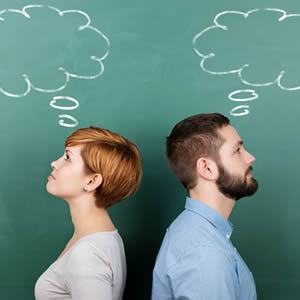 It’s official. Scientists have proven that men and women’s brains are physically wired differently and this has an effect on how the genders see the world. This means the genders have different perceptions of a situation, which evoke different emotional responses. This in turn means it can have a significant impact on your personal life, work life and also your Customer Experience.

The differences between men and women have always fascinated me. In fact when I read about this new study it came as little or no surprise. In fact, I believe the reaction of many married couples would be “you don’t say?” Let me explain.

I started ‘going out’ with my wife Lorraine when she was 16 and I was 17. (Courting or in a relationship, hanging out or whatever phrase I should be using today!) We married 6 years later and have now been married for 32 years.

Back in the day, I thought men and women were the same. After living together for a few years I realized I was wrong. I have to say Lorraine and I rarely argue, but when we do 50% of the time is because of the differences between men and women. Over the last few years it has really annoyed me that the ‘political correctness’ brigade suggest that there is no difference between the genders, when I think there is.

The big issue is they were confusing ‘difference’ with equality.

Now let me state unequivocally in case of any doubt – I believe 100% that men and women are and should be equal. I deliberately use the word ‘should’ as I also recognize that even in today’s day and age this is not the case, especially in developing countries. Women worldwide are still underpaid for the same job as men and certainly not enough women are in senior positions in companies.

Having said all of this, let’s not confuse equality with difference. Men and women are different in many ways. Different also doesn’t mean that is good different or bad different or right different or wrong different; it means different. I believe these differences should be recognized and celebrated and we should not put our head in the sand and pretend they are not there.

Allan Peace has written a great book on this called Why Men don’t listen and women can’t read maps.

Take a look at this video when you have read this blog. It lasts 30 minutes but is informative and entertaining:

What is the difference?

The new study out of the University of Pennsylvania claims that men’s brains and women’s brains are hard wired to excel in different areas. That means that when they take in the same information, they will process it very differently.

The researchers looked at the brain activity of 949 females and males between the ages of 8 and 22 using a brain-scanning technique called diffusion tensor imaging. This imaging measures the flow of water along a nerve pathway, which shows the connectivity in each sexes brain. Men were more likely to be connected from the front to back on the same side of the brain, while women were more likely to connect between both sides of the brain.

This new study is the first time scientists have been able to show it physically with MRI imaging.

Undated handout photo issued by National Academy of Sciences of brain networks showing significantly increased within hemispheres in males (upper) and between hemispheres in females (lower).

These differences simply mean that men and women are better at different things, naturally. Women’s brains are better at processing lots of varied information together, especially when it requires using both logic and intuitive thinking to come to a conclusion. This is because they use both sides of their brain. Men on the other hand are better at taking information and using it to complete complex tasks, almost immediately. But remember this is a sliding scale and not absolute.

How this affects your customer experience design

Men and women process information differently. That means when they have an experience with you it can be experienced differently. How many women love shopping and how many men talk about just going to get what they need a more targeted approach. Again this doesn’t mean that either one is right or wrong, just different. So how you approach each of the sexes is something that you need to consider in your customer experience design, particularly on the emotional side.

Our research shows that over half of the typical customer experience is emotional. The emotions of male or female customers will drive their decisions when it comes to which brands they choose. These emotional triggers contribute both to their rational mind and their subconscious. So in other words, they realize that their emotions are playing a part in some ways, but in others, even they have no idea why they did what they did!

In a perfect world, with limitless budget and time, you could create two separate experiences that are triggered into action as soon as you identify the sex of your customer. You could virtually have an experience that is designed for each of them labeled with a picture on the door, like the men’s or ladies’ rooms in a restaurant.

Since we don’t live in that perfect world or have those kinds of resources at our disposal, that isn’t realistic. Most organizations cannot design two different experiences. In fact, some companies have hardly designed one at all. With these facts in mind, perhaps it’s better to build an experience that covers both sexes.

Here are two things to consider that will help cover the emotional needs of both the sexes:

NPS®ychology has long shown that men and women think differently (as have many marriages).  Now science has proven what all of us married couples have known for a long time that men and women are wired differently – physically. Designing customer experiences that take into account the differences and addressing these different needs is more likely to result in a better emotional experience for all your customers.