Comcast CEO Brian Roberts vowed this month that the company wants to repair its terrible reputation for “shoddy Customer service.” My take on their latest vow to fix their Customer service problem: A leopard doesn’t change it spots. They have been talking about changing for years, but nothing has happened. Talk is cheap.

Just look at the following example. From phone call recordings that went viral of the poor behavior of their Customer Service Representatives to “inappropriate” name changes, their missteps as an organization have reached a legendary status. So legendary, in fact, that they have a Wikipedia page called, “Criticism of Comcast.”

Comcast’s improvement plan involves investing in three new Customer support centers, training, and technology, as well as hiring thousands of new Customer service reps. They want to redesign their billing for “more transparency.” Also, they revealed plans to release a Tech Tracker tool that will allow people to predict better when the tech will arrive. Finally, they had a pledge they will aim always to be on time for Customer appointments.

I have a number of concerns when I read about their plans. First of all, Comcast plans to hire more than 5,500 people for customer-service jobs. On the face of it, this idea sounds good. However, if you simply employ people and put them into a poor environment, what you get is just a lot more people who do a poor job.

Secondly, a couple of the items in their laundry list of improvements strike me as startlingly elementary. What is a bill if it isn’t transparent? No Customer should be wondering what they are paying for from their cable company. And please don’t get me started on “aiming always to be on time for Customer appointments.” It boggles my mind as I wonder, “What have they been aiming for up to this point?”

The culture at Comcast is clearly poor. They don’t have the Customer at the heart of everything they do. In fact, it’s not even on the same planet! This type of culture problem comes from the top. When leadership makes it clear what is important, the rank and file reflects those values.

Customer Centricity is a concept we look at when we consult our clients. We developed the Naïve to Natural model as a tool to assess where an organization is as it pertains to Customer-Centric culture.

Here is a helpful graphic that describes our Naïve to Natural Model. 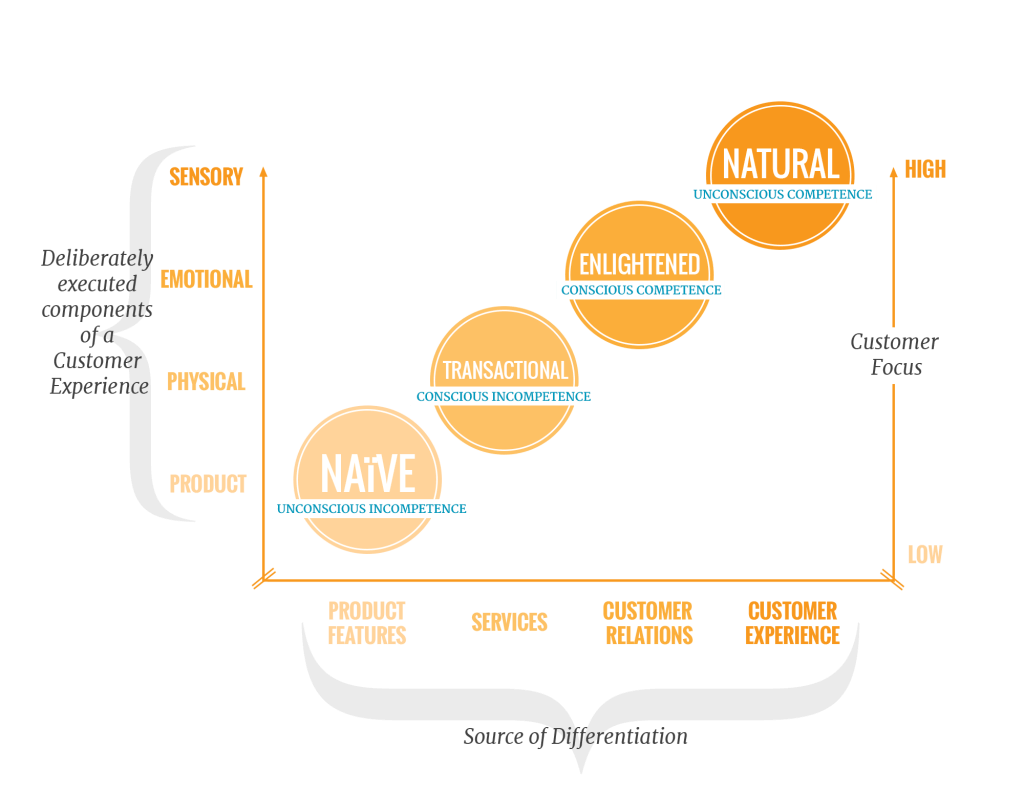 The least Customer-Centric organizations are what we call Naïve. When we train on this tool, we describe the naïve organization with the example of a proprietor of a shop with his back to the Customers as he goes about his work. A naïve organization does not consider the Customer’s needs. Most times, they don’t care that they don’t either. In Comcast’s case, the proprietor has his or her back turned while changing a Customer’s name to something inappropriate like the story above.

Comcast is in Serious Need of a Culture Change

Year after year, Comcast finds itself in the number one spot on one of our surveys—for the Top 10 Worst Customer Experiences! The American Consumer Satisfaction Index  (ACSI), an organization that measures Customer Satisfaction in the U.S., shows Comcast declining in satisfaction for all service areas over the previous year. They find their name on many “Most Hated” lists, including one from January of this year on 247wallst.com (they are #10 of 10). But their Customer Service doesn’t change.

Culture drives the behavior of your employees. For Comcast to change their Customer service levels, they have to change their culture. The leadership needs to recognize their role in broken, not Customer-centric culture and set a better example with their actions for their employees. Furthermore, they need to motivate the team to do the difficult work needed to fix their problems, i.e., change key performance indicators to reflect improvements in Customer Satisfaction or Net Promoter Score® and tie incentives to this performance. And for goodness sake, they need their technicians to turn up to their appointments on time!

Hiring more people to do the same bad things isn’t going to help change the Customer service problems at Comcast. Nor will creating new Customer Support centers or adding “training” and technology. Putting Customers first and their needs at the center of everything Comcast does is the way to effect change; and that only happens in the culture from the leadership on down. If they don’t bother with this, then this claim to rethink their Customer service issues is sure to happen–between the hours of 8a.m. and 6p.m. on the 12th of Never.

Do you think Comcast has a prayer of fixing their Customer Service? Why or why not? Please share your insight in the comments below.