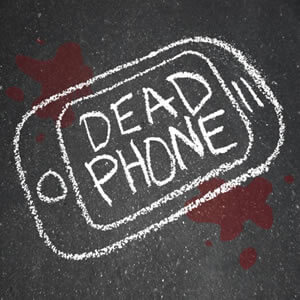 I love stories. They tell you so much about life. Some of the best stories come from Greek mythology which has such resonance that they give us some of the words in the English language today, like hubris. Hubris means ‘excessive pride or self-confidence; arrogance’. In ancient Greece, there was no greater sin against the god than hubris. A mortal that displayed hubris, when a human had such excessive pride or self confidence that they dared to compare him or herself to the gods, was usually swiftly and savagely punished.

It can be seen over and over again in Greek mythology. There was the story of Niobe who compared herself to the Goddess Leto and then had both her children struck dead and was turned to a stone that always wept for them. Or the human Arachne who challenged Athena to a weaving contest and lost not only the contest but also her human form as the goddess changed her into a spider.

Today this manifests itself in the form of a mobile company that did not see the change in the market when a competitor introduced a new phone that turned the industry on its ear and as a result ended up being sold to a computer company for a sum that was less than a third of its annual billing just five years ago!

Hubris. It gets them all in the end

In 1999, there was no other phone to have than a Nokia. They were at the top of their game with a market share that made them the envy of all other mobile phone companies. Their phone was so big that The Matrix, the biggest sci-fi, futuristic movie of the spring of 1999 had their heroes wield a Nokia 7110, with a spring action slider that popped open for a dramatic effect.

The millions of viewers of that film salivated over that awesome new phone, wondering when it would be available at their local mobile phone store. It was the smallest and lightest phone on the market. But for just under 1000 Euros, very few of these millions of viewers would actually own the phone.

The phone was the natural choice for the movie because Nokia dominated the phone market from 1998 to 2012. The annual revenue for the Finnish company that employed 100,000 people in 120 countries was $30 billion at one point in time.

Then on June 29, 2007, Apple introduced its iPhone. Nokia was nonplussed. They still had 47% of the market share. They said the phone would be good for the industry, that handsets would naturally become more high end.

I had a meeting with Nokia when the iPhone came out. It was clear to me that they had their heads firmly stuck in the sand. All they could say was that the iPhone battery was rubbish and no one would use it once they figured that out.

The gods of consumerism were unimpressed by Nokia’s response. They were quick to abandon Nokia when they rested on their laurels of enormous market share and failed to respond to Apple’s innovative phone. They bought up all the bad-battery phones that Apple could make. All the while, Nokia’s market share shrank by double digits each year.

Oh How the Mighty Have Fallen

So what happened to the mobile phone giant? They had great phones. They had market share. They were perched atop the mobile phone world for nearly 10 years. How did it unravel so quickly, in just six short years?

The answer is simple. They had no customer emotional loyalty.

Emotional loyalty is key to branding. It helps you weather competition and hang on to your market share. It is the reason that when faced with a decision, consumers will choose your product without even fully understanding why they did it. Emotional loyalty is the difference between being a mobile phone juggernaut and being the featured brand on a segment of a TV show called ‘Where are they now?’

Nokia is in the news right now with a very public fall but the truth is that they are just one of many of the mighty who have fallen. Try to find a Blockbuster store these days – it seems those late fees really got under consumer’s skin and they let Blockbuster know it as soon as a better alternative was available. Remember the Kodak kiosks in nearly every mini-mall parking lot? The only place you’ll find one of those these days is on a movie set of a period piece set in the ‘good old days’ which is right next door to Circuit City. And let’s not forget Pan Am, ‘the World’s Most Experienced Airline’.

My point is that things change. New companies come in and shake up the market, leaving the old guard wondering, “What happened?” if they don’t respond. Companies that forget to brand with emotional loyalty will suffer the same fate as these giants of their industry – once mighty industrial leaders and now cautionary tales to businesses today.

Building Emotional Loyalty Is Difficult for Some Businesses

Business, in general, likes to shun emotion. The old saying goes, “It’s not personal; it’s business.” Traditionally, businesses like to focus on the measurable and predictable side of transactions. Business people like to focus on building a product and expanding a market share.

There are several reasons why they don’t like emotion. I wrote a post about 10 reasons why emotions are ignored in Business. Businesses haven’t had to do a lot of this before today; they are unused to taking the emotion of a decision into account because the old way of measuring rational responses was enough. By making sure that they were creating a good product and growing market share, they were able to ignore the emotional side of the transaction.

But today it is a different world. There is globalization to consider. There is the access that the Internet gives consumers. Finally, both of these factors mean that there is a commoditization of products. There is no way that a business can thrive, or even survive simply by focusing on the rational side of the transaction.

But as a colleague of mine posted, when a company focuses on differentiating itself based on customer experience…well, that’s a whole different story. Apple gets this concept almost as well as any other company out there.

Apple is a master at customer experience. They make sure they think of everything, right down to the way they stand when they talk to customers on the store floor. Everything they do is designed to make their customers feel like a part of the club. They have done such an excellent job that the customers put the apple decals on the back of their cars. Have you ever seen a Nokia sticker on a car? Me neither.

So by ignoring the innovation of Apple and ignoring the importance of designing an emotionally engaging experience, Nokia suffered from an acute case of hubris. And the gods of consumerism put them in their place – as a subsidiary of a computer company.