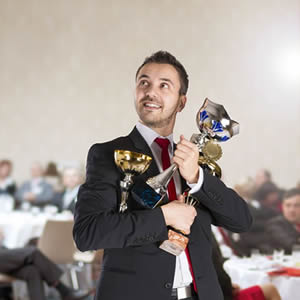 Why We Hate Losing

Whilst watching Andy Murray playing, and winning, the Wimbledon Tennis finals on Sunday I started thinking of when I was a young man and the only name in Men’s Professional Tennis was Jimmy Connors. With 8 Grand Slam Singles titles and 2 Grand Slam Doubles titles, he was a winner by definition. He ruled the tennis court throughout the 70s, holding the top rank for 268 weeks in his career, including a record 160 weeks at the top spot in a row.

With all this winning in his career, you would think that it was because he loved to win. But Connors attributes his stretch of victories to something else, something to which we can all relate. Connors said, “ I hate to lose more than I love to win.”

Connors is not alone. Professor Kanheman, a renowned professor at Princeton University’s Woodrow Wilson School who won the Nobel Memorial Prize for Economics in 2002, explains the prospect theory which shows us that we tend to look at things from ‘gains and losses’. We all have a high aversion to losing something – even more than we do to making a gain of a similar amount. We have a loss aversion and the ratio is about 2 or 3:1. In his video, he gives the example that if we had a bet on the result of a coin toss and if you won I would give you $ 10 and if I won I would give you $ 10, most people won’t take the bet as the odds are not worth the potential ‘loss’. However, if I offered you $ 25 if I won against your $ 10 if you lost, people would take the bet. That same ration applies as the amounts increase. This example shows how the perception of losing is harder to overcome than selling the benefits of winning.

A good example is the recent move by Netflix that aggravated its subscribers. Netflix decided to discontinue stocking 1800 titles to make room for 500 more, part of the natural ebb and flow of their inventory. The public outcry was palpable. Never mind that the offended subscribers didn’t actually rent these movies and probably never would have. These customers didn’t like the idea that they weren’t there anymore for them not to rent. They felt they had lost their option to ignore them.

What Kanheman says and the Netflix example demonstrates is that our attitude to gains and losses are very different. We are all like Connors in that we hate losing more than we like winning. We all feel that taking away a service that we had, even if we aren’t using it, is a loss of value. Because we are, as humans, irrational by nature, we will feel this loss cannot be overcome by any benefits of a new product or service offered instead.

Customer dissatisfaction is often associated with perceived loss of value

What this means to you is that your customers don’t want to lose things from their experience that they think they are entitled to as a part of your service. Many Customer complaints happen because Customers perceive they have lost something they were meant to have. This is where the Prospect theory or loss aversion creeps in.

I will give you an example from my own life. Recently, I was notified by one of my vendors that I needed to migrate to eStatements over traditional paper billing or I would be charged a fee to continue to get my paper statement. The logical part of me understood that this was only meant to enforce my use of the online statement, which I had meant to switch to anyway. But the irrational side of me was miffed at the notion that I should pay for the privilege of the company to bill me so I could pay them for their services. The truth was, I usually paid the bills online anyway, rendering the paper statement irrelevant. But I was annoyed that the paper statement would no longer be an option for me for free, and instead was considered an extra service for which I would pay a premium.

Changing the way you do business is often a necessary part of the process. Like my vendor above, paper billing is a costly and obsolete way to deliver bills to a client. Moving the customers to an eStatement is a great way to cut costs and improve service. But only if you can frame it right for the customer. The important point here is to recognise this is not just about the ‘what’ – the changing of the statement – but more about the ‘how’ – how it was communicated and positioned with me.

After Netflix decision to remove the titles, one of these offended customers appealed to journalist, Dan Ariely of the Wall Street Journal and author of several New York Times bestselling books on behavioural economics. She wanted to know what she was so upset about losing the titles. He answered her that she should think of Netflix like a museum, to help her frame the situation in a new way. Not that she lost something she was entitled to, but that the exhibition had simply moved on to feature new works of art. What is key here, however, is that in order to make peace with it, she would have to change the way she thought about the loss.

The importance of designing this thinking into your Customer Experience.

The reality is that designing a Customer Experience is more than just looking at the rational, logical steps of the experience. As I covered in my post “Why Journey Mapping Sucks” most organizations just map the Customer’s rational journey and don’t think of their emotional journey and how things like the prospect theory play a role.

To avoid the feelings of loss, you should consider how you frame the change so the customer perceives an improvement to the service, and likewise its perceived values. Design a customer experience in a way that sells the benefits of the new service to your customers instead of only apologizing for what they lose. Even if you can’t minimize the loss entirely, it will go a long way to manage your customer’s expectations.

When we are training our clients on our journey mapping process, Moment Mapping, we run through a number of the psychological theories and design a Customer Experience to meet the Customer’s emotional needs. There are many things, like loss aversion, that Customers are not aware of how it is effecting their decisions. Using this type of methodology, you can look at the emotional state with which a customer is entering an interaction with your company and take this condition into account when you design the experience. We would strongly advocate when designing your experience you need to look at the experience from a rational, emotional, subconscious and experience psychological perspective to build customer loyalty.

Perhaps if Netflix had used this approach, their customers would have applauded the pruning of the list to include only the most pertinent and quality titles of modern cinema instead of feeling a void of missed opportunity for what was no longer available. If my vendor had taken into account the fact that I probably wanted to switch to a more efficient and effective way of billing to be part of a green movement that saves our precious fossil fuels and leafy trees, I would have felt differently about making the move to eStatements.

So while none of us will probably ever win a Grand Slam tournament or be the top seed in the world on the professional tennis circuit, we all have a little Jimmy Connors in us. We all want to win, but we hate to lose even more. We all share his sentiment on our court, which we call consumer transactions. Knowing that, you can design a customer experience that appeals to the winner in all of us by proving to us that there is nothing to lose.

How do you design your experience?