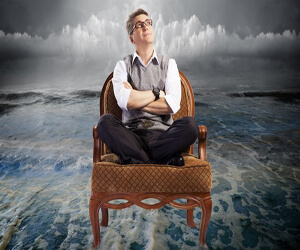 Opportunity is out there

I did a lot of travel recently. I flew with 5-6 airlines, used 4-5 different rent-a-car firms, stayed in half a dozen hotels, dealt with banks and logistic companies and let me tell you something – the opportunity to differentiate on the basis of customer experience is so much out there, even more than you think, just waiting to be grasped. Now let me make a full confession, I’m a customer experience consultant and for the last 4+ years I’ve been working with a number of clients, written a number of papers, read a number of other people’s posts on the subject, participated in a number of conferences, so much so that I almost get a feeling that everyone has jumped on the band wagon and “is doing customer experience”. But they are not! They are lacking 3 main things:

1.  A theme / clear vision of what is the experience    they are trying to deliver

2. Governance structure to embed it into the business

3. Consistency of the delivery

The following stories from my recent dealings in travel and everyday life will illustrate how much opportunity is still out there and the curse of being a customer experience consultant seeing opportunities being wasted.

Airlines – I was going to fly with Virgin Atlantic for the US, where I was also going to do quite a bit of domestic travel as well so I decided to travel light (as much as I can). No big suitcases. A cabin size suitcase and a small bag. Most airlines luggage allowance for long-haul flights are at least 21-23kg for checked-in luggage and 10-12 kg for a cabin luggage, but no one has ever looked at or bothered to weigh the cabin luggage. No one but Virgin Atlantic, which recently introduced a new policy or maximum 6 kg for a cabin luggage bag. I had read about it from a blog from a disgruntled former gold card member, but I found it hard to believe that Virgin, above all, will make a problem of a couple of kgs above that 6kg limit. But they did! In total, I had about 17-18kg of luggage, well below the combined 29kg allowance, but my problem was that these were in two small bags, rather than in one big suitcase and of course I had my laptop in, so I couldn’t check all luggage in. So I reorganised the luggage on the side and went back to another Virgin Atlantic desk. Guess what, this time no one even bothered to weight my cabin luggage (as I initially thought). It’s just that the first time I queued I went to a desk where there was a girl who was getting trained and they played by the company book to the dot! This shows the lack of consistency in the company and it’s typical for many organisations. It’s a fact though that Virgin Atlantic is going in an opposite direction of what made it famous and took the business away from British Airways – the focus on customer experience that made an icon out of Virgin Atlantic. Now I think the situation is reversing, Virgin is becoming arrogant whilst BA is working more on improving its customer experience. You must have read this famous complaint letter about the food in Virgin Atlantic. This shows the lack of consistent theme for the experience and living up to Virgin’s brand promise.

So no wonder the flight was quite empty and as we were getting on board they said that there will be quite a few empty seats so we can later change our seat. So I did just after take-off, but out of all seats I sat on an “extra-legroom” one and got told off. So I got back to my seat and didn’t bother anymore but I couldn’t notice that in a little while a lady took on all 3 seats and no one told her or asked her anything. So the moral of this story is: be consistent and don’t rest on your laurels. I have to add that now Virgin is well below the standards of Emirates and others.

Another story from the airline industry comes from American Airlines (which are just about to exit from bankruptcy administration for a merger with US Airways). The Airline Representative announced that due to some extra military equipment on board some passengers had to be denied boarding in order to balance the plane and she needs 3 volunteers who would get some vouchers as reward for this. Only one volunteered which meant that she had to pick 2 passengers to be denied boarding. With all my luck she picked me and a colleague. We stood calm and went to the desk, but all we heard was “stay here” and the rep looked at a few things, turned hear head and started to let other passengers in. No other word or explanation of what follows….nothing. No excuse, no acknowledgement of our feelings, nothing! We weren’t going to dispute the fact that we had to stay but we were three people travelling together so we wanted to stay together, which we heard was not an option as the person who was allowed to board would have to pay for a new flight. The second problem was that out of the three of us, the person they picked to board was the only one without a driver’s license, which meant that she wouldn’t be able to pick-up the pre-arranged rent-a-car and drive to the hotel. We wanted to switch her with one of us. That’s all! But no one heard this part, as they just parked us to the side and behaved as if we were not there. Luckily a second representative came in, who decided to do some more checks and found that fewer passengers had actually checked-in than had booked which meant we could actually get on the plane. Again this situation shows the lack of thought about the customer experience, what emotions do customers feel and how to handle these. What left us with such a bad feeling after it was not the fact that we could have waited for a few more hours till the flight, but the fact that no one acknowledged our concerns, feelings and situation as a whole. This didn’t require any capital investment, just someone to speak to us like a human being, not a machine. I guess “empathy” didn’t feature in the American Airlines training, though they just deal with people, whilst it is right in the centre of Apple’s training, who could’ve taken the view when dealing with electronic products, but they didn’t and that’s what had made them successful at the time.

I’ll continue my story in my next blog where I’ll look at the missed opportunities in a few other industries as well some of the good practices we have seen.

In the meantime tell us where do you see opportunities to differentiate on the base of Customer Experience?