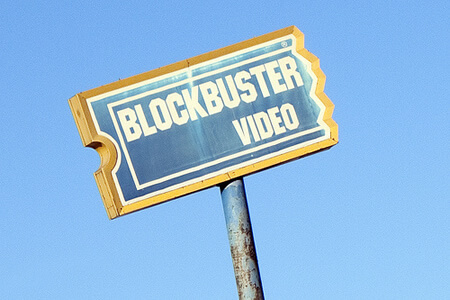 Blockbuster is shutting down their remaining US stores. This signals the end of the large chain video stores. If ever there was an example of a company that missed the mark on customer experience and paying the consequences, Blockbuster is it.

My regular readers know that I am a fan of Netflix. I haven’t always agreed with all of their moves, and sometimes I have criticisms on how the handle changes, but generally I am a fan (and a subscriber). 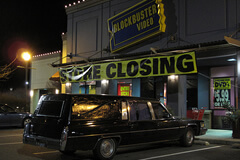 When Netflix announced a new way to handle the business of renting movies, Blockbuster didn’t respond. Blockbuster believed that it wasn’t necessary. They had the lion’s share of the movie rental business and had no interest in making a change to their tried-and-true business model.

Over the next five years, Netflix winnowed away at the market share. At first, the idea of having to wait for the mail for your movie was a challenge for new customers. But once they tried it, customers found they liked getting movies in their mailbox and sending them back whenever they were done watching them – with no late fees.

Now, I am a fairly organized bloke. I can get my travel documents and overnight bag packed in less than 15 minutes. I am a champion multi-tasker who can blog and watch a soccer match at the same time. But I was challenged by the deadline at my local Blockbuster. I am quite certain that I helped keep their ledgers in the black for years in the early 2000s.

While I understood their return/late policy, it grated on me. Not only that, it was inconvenient with which to comply. Plus, Blockbuster made it worse by moving the deadline to return your movie from 9pm the next day to 5pm the next day. For working people, that doesn’t “work” does it?

But they weren’t done. They then moved the deadline up to 2pm or some other ridiculously early time. I honestly don’t remember…it’s been so long since I rented a movie there. My point is that their customer experience always left me feeling hassled.

So as soon as I had a better option, where I returned the movie when I was done with no “late penalty”, I took it. Plus I didn’t even have to go to the store to do it but instead sealed it in the red envelope and dropped it in the outgoing mail. Now I don’t even fool with envelopes, I stream movies and other programs directly.

Blockbuster tried to respond to Netflix, but they were too late. After Netflix was crushing them, they came up with an online movie service. They also abandoned the confounding late fee policy. Blockbuster stores across the country all had huge banners that read simply “No More Late Fees.” But it was too late, their customers had moved on. I remember thinking snidely one day as I read a banner while driving by my local Blockbuster where I had paid countless late fees, “Of course there are not late fees…I’m with Netflix!”

Blockbuster suffered from hubris. Hubris is from ancient Greek and means extreme arrogance. Blockbuster exhibited hubris when Netflix announced their business model and they didn’t respond. This is a lot like Nokia, which I discussed in more detail in my post, “How Hubris Killed Nokia”. Earlier this year Microsoft bought Nokia. Nokia was also a dying brand, languishing in their hubris that took the form of a poor decision not to compete with new phone technologies, including Apple’s iPhone when it was launched in 2007. Now both companies are paying the price for their hubris and for not paying attention to what the customer wants or the experience they were providing.

Luckily, more and more companies understand the importance of what the customer wants and the experience they were providing. In our 2013 Global Leaders of Customer Experience Management (CEM) Survey, we learned something very interesting this year. For the first time, our leaders identified as their biggest issue how to incorporate the CEM philosophy into the corporate culture. In previous years, the biggest issue has been to demonstrate how an investment in CEM will perform in an ROI analysis. To us, this shows that more organizations believe in the importance of Customer Experience and less are trying to convince themselves that it is worth the time and money.

Netflix is still a pioneer in improving customer experience. In August, Wired.com describes Netflix future plans for their customer experience. They have plans not only to improve how they suggest movies for you queue but also for ways to figure out who is in the room watching (by using a camera attached to the system, like your Xbox) to see how they can combine the interests of the individuals to make a suggestion that will be a winner for everyone. Once you get over the weird idea of the camera seeing into your living room, this is a pretty cool idea and indicative of their commitment to providing the best possible customer experience.

So Blockbuster will go the way of Nokia, not with a huge corporate “merger” (read: acquisition) but a splutter and gasp into brand oblivion. After all, there are only 300 stores left in the first place, a far cry from the 90s and early 2000s when there was a store nearly on every corner in the US. They will serve to future mega-brands as a cautionary tale of what happens when you forget to listen to what the customer wants because you are too busy counting your market share.

Colin ShawBlockbuster: The Next Cautionary Tale11.27.2013