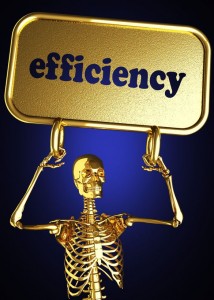 I couldn’t agree more with Casey Haksins and Peter Sims who argues in a recent HBR blog that too much efficiency can be just as deadly as too little as it leaves no room for trial and error.

We all remember the 9.0 earthquake off the coast of Japan that triggered a massive tsunami that took the lives of over 15,000 people. The disaster led to a nuclear plant and electricity network crisis, caused factories to close but not just in Japan. Automobile and other manufacturing factories in the US, Europe and other parts of Asia shut down or operated with reduced capacity due to the shortage of vital components that were supposed to come out of Japan.  Before companies could fully recover, massive flooding in Thailand caused further disruptions in Asian supply chains. Total losses from those two disasters were very likely greater than the savings companies had won, over the preceding years, by squeezing out costs and making their supply chains so efficient.

As the authors say, you have to expect the unexpected, yet in retrospect, too many companies and leaders have inadvertently made themselves fragile in their pursuit of ever-greater efficiency. Then when a shock inevitably comes, they are unable to absorb it.

Too much efficiency can be just as deadly as too little, if it leaves an organization unable to cope with change — either because it’s too fragile to survive a crisis or too rigid to adapt to industry changes. So the goal should not be greater efficiency, but rather efficiency where it makes sense.

And it’s not just about being prepared for 100-year events. An over-focus on efficiency can also make it more difficult to cope with gradual change. Eliminating all errors makes it hard to compete in the trial-and-error process that’s required for a company to adjust, because there are no trials without errors.

And this is very important especially in Customer Experience. As the era of manufacturing led to a run to the bottom to strip out costs to compete on price, many companies moved to compete based on experience not just the product in order to create an added value and loyalty so to preserve or raise their operating margins. The more companies moved into this space the more they raised the bar. Whether you are a telecom, a bank, an insurer, a retailer etc. people will judge you not so much against your competitor but against the experience they get from companies like Amazon, Apple, Starbucks, Disney, Nordstrom, Lush etc. as they set their expectations of how things can work. Think of a country you haven’t visited e.g. Japan, Switzerland or India. You’ve never been there but you already have expectations in your mind of what it could be like.

Therefore; innovation in the experience becomes as important as in the product itself. We recently gathered a few companies who achieved great results with their customer experience programs to present to a client of ours. Those companies came from the USA, UK, Russia, Switzerland and Turkey and operated in different sectors but one thing was common that led to their success – the room for trial and error they had.

One of the challenges to people trying to work on a customer experience initiative is to build the business case for it and sign up to it as that’s the normal organisational process. Whilst when it comes to a product innovation it’s also not easy to predict the number of products you are likely to sell but the company often just goes with it as it is pretty much at the heart of what they do, when it comes to customer experience initiatives things are not that straight forward. It’s not always clear the link between a subtle change in the experience to the number of new customers, the effect on the churn rate or the long term spend pattern of existing customers. That is often an obstacle to enthusiasts with creative ideas who see little support and don’t wish to bet it all on one card.

What advanced thinking companies started to do is to create a test environment for ideas. They do this either by forming a panel of customers they can talk to regularly or use social media or quasi-social media platforms where they engage and get feedback on ideas from customers.

Haksins and Sims point a lot of businesses that have done better and not just obviously creative businesses like Pixar, Amazon, IDEO, and Google. A number of leading firms, including Cisco, General Electric, GAP, General Mills, AT&T, and Procter and Gamble have adopted approaches that are “inefficient” in important ways. They create deliberate experiments and focus on learning and iterating rapidly. The idea is to get it good enough to begin, and then improve rapidly, rather than trying to get everything right from the beginning. This approach has helped them adapt and succeed in turbulent times.

We need to see those losses not as failures but as investments in the future. To succeed, we have to make it cool to fail in the right places, as long as it’s recoverable, and as long as we learn from the failures and adjust.