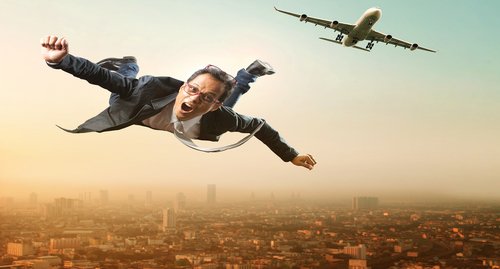 When United Airlines brutally forced a senior citizen off a flight this week to accommodate United crew members, the social media world lit up like a Roman candle.

You’ve probably seen the viral video of the man being seized by his arms and roughly dragged down the aisle by police officers, his shirt riding up, his face bloodied, and his glasses skewed on his head as horrified passengers watched. According to news reports, the man was a passenger on a United flight from Chicago to St. Louis. To make room for four crew members, United asked people to voluntarily give up their seats. When no one took the offer, passengers were chosen at random, but one of them, a 69-year-old doctor who appeared to be of Asian descent, refused to get off the plane.

Who would have thought you could be beaten up for insisting on your right to use an airline ticket you paid for?

The treatment this man received was deplorable. But United’s response to the entire thing shows an appalling tone deafness and disregard for its customers.

After the incident, United CEO Oscar Munoz released a statement saying, “I apologize for having to re-accommodate these customers. Our team is moving with a sense of urgency to work with the authorities and conduct our own detailed review of what happened.”

“Re-accommodate?” “Moving with a sense of urgency?” Please. Where’s the apology to the victim and the other passengers? There wasn’t one, and United’s statement does nothing to address the real issue: we are horrified that a paying passenger could arbitrarily be treated this way on a major American airline. He wasn’t re-accommodated! He was physically assaulted!

In a letter to employees, Munoz praised the United employees who “followed established procedures” and commended them for “continuing to go above and beyond to ensure we fly right.”

Unfortunately, this uncaring attitude toward passengers seems to be par for the course at United. Remember last month’s social media storm, when two teenage girls flying on employee family privileges were denied boarding because their leggings didn’t meet the company’s dress code? United’s response: “The passengers this morning were United pass riders who were not in compliance with our dress code policy for company benefit travel.” That may be, but does that justify leaving a couple of teenage girls stranded at a major airport? If it were my daughter, I’d be furious.

The ironic thing is, last month, Munoz received PRWeek US Communicator of the Year award.

United now has a PR crisis of epic proportions on its hands. Social media, including social media in China, has been ablaze with criticism. Jimmy Kimmel created a United “commercial” parodying the event. And United’s own #UnitedJourneys hashtag – meant to be a worldwide album commemorating the joys of travel – is awash with references to the event.

Here’s How Things Could be Different

As the owner of a customer experience consultancy, I see these incidents as a flaw at the very core of United’s corporate philosophy.

Social media has placed us in a vastly different world, and companies that don’t realize this and adapt are going to have problems. In years past, the United incidents would have been seen by people who were there, but it’s unlikely they would have found their way into the media. Today, virtually everyone can broadcast an event or experience, potentially reaching millions of people.

This means that, more than ever, companies need to be thinking of their customer experience as a core component of their business. To do that, customer experience must be a priority at the very top levels of management, and it must be communicated down the chain of command all the way to the employees who interact with customers face to face. This upper-level focus seems to be missing at United, which seems happy to praise employees while blaming passengers who are minors, senior citizens and minorities.

At our customer experience consultancy, we have a training called “Philosophers Day” where we introduce senior executives to the core concepts of customer experience and show them how they can use these to build value in their company. We have found it’s a great way to get senior leaders on board and invested in creating a truly exceptional customer experience.

Once business leaders embrace a customer-centric business model, one of the best ways to implement it is to empower their employees. Research has shown that employees are happier and more motivated if they have some control over how they do their jobs. For example, at SoulCycle’s indoor cycling studios, employees have a budget for gifts or other perks to “surprise and delight” customers, at their discretion.

Airlines, of course, have a host of regulations and security concerns, but it seems clear that United employees are rewarded for following rules, not for using creative thinking to find common-sense solutions that will keep customers happy. In a more customer-centric world, United employees could have averted the situation by having crew members fly on a different airline or travel by car. United could have offered more money to volunteers – eventually someone would have happily taken the cash. The girls in leggings could have been given a warning and allowed to board. But all of these solutions require employees who are empowered to deviate from ‘by the book’ solutions when empathy and common sense calls for it.

I predict that the image of the man being dragged off the plane is going to stay with people for a long time. It looks like United’s Friendly Skies just got a lot less welcoming.

Should you stop flying United because of this incident? Share your thoughts in the comments box below.

How your customers should be treated – Join me for this free webinar on May 2nd when I will outline where the future of Customer Experience lays, understanding Customer behavior at a deeper level.

“Sorry Seems To Be the Hardest Word” — How to Apologize

7 Reasons to Focus on Customer Value

Why Management Ignores Customers – and 7 Ways to Fix It

Colin ShawPR Nightmare! What United Should Have Done04.18.2017