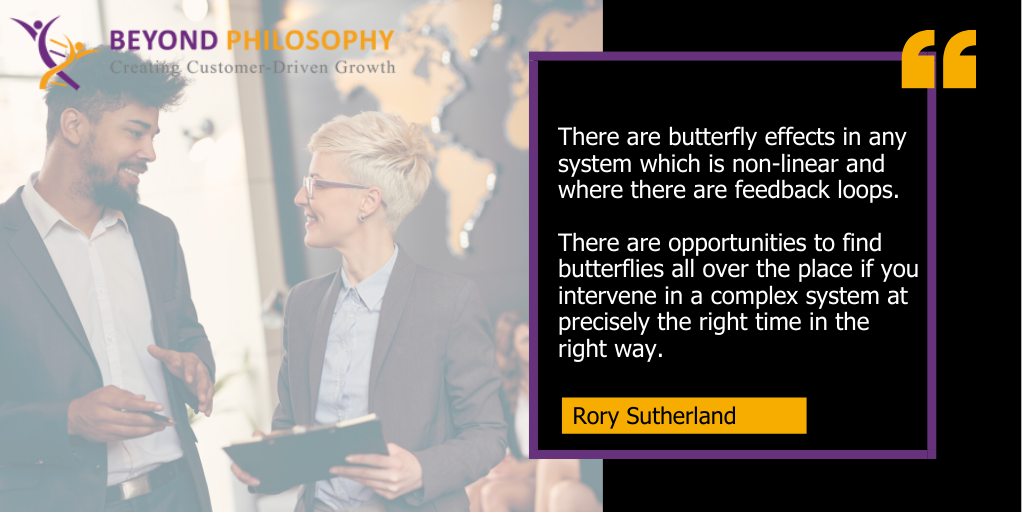 In our last issue of Why Customers Buy, we discussed how doing things differently than your competition could be the most reliable path to success for your brand. Today, we are going to discuss in more detail why this works and what you can do to implement these surprising ideas that don’t make sense to encourage the success of your brand. 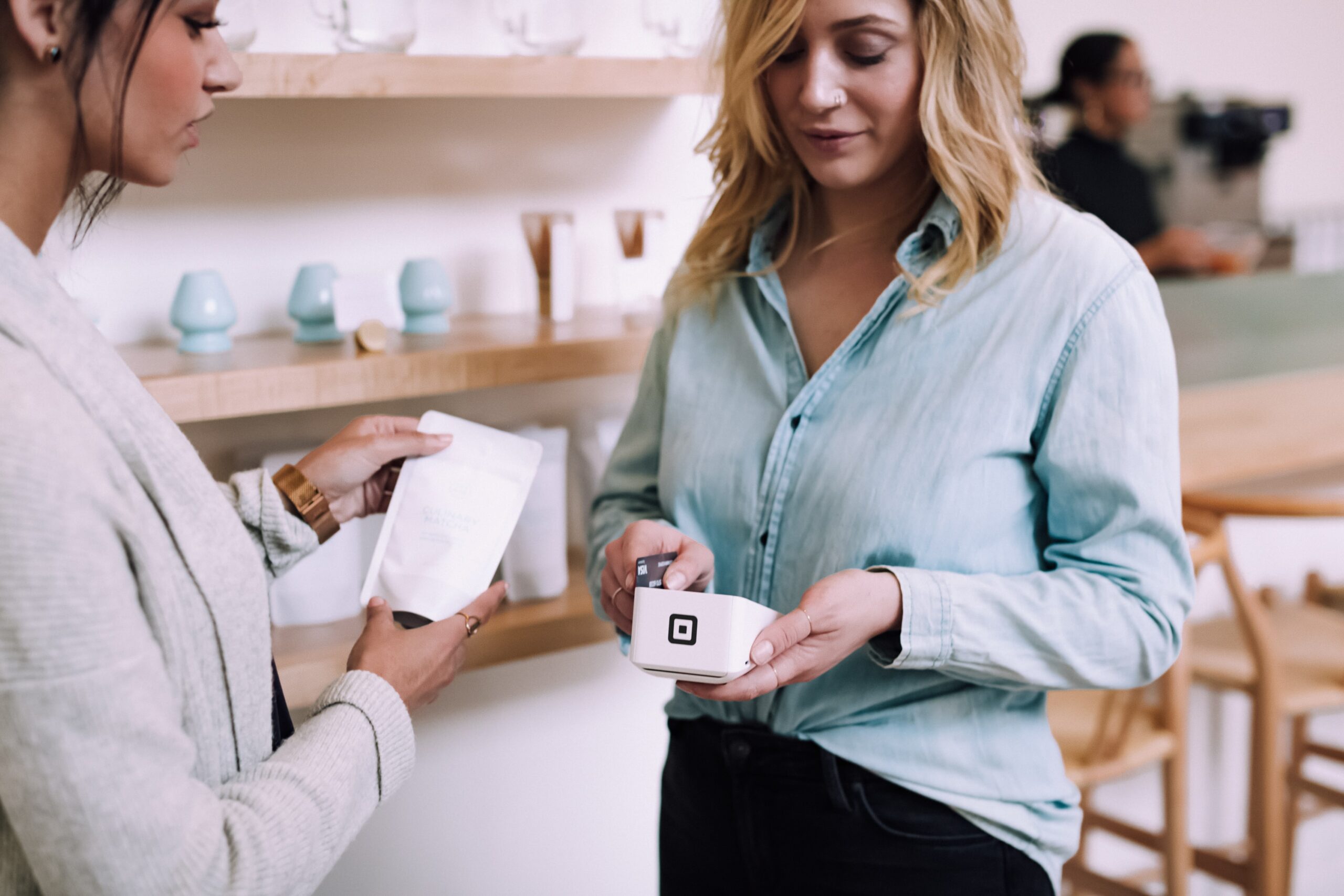 Before we get into that, let me remind you that this issue is based on a conversation we had on our podcast recently with advertising legend Rory Sutherland (@rorysutherland), who is the current Vice-Chairman of Ogilvy in the UK. In addition to his TED Talks and contributions to Impact and Wired, he is also the author of the book, Alchemy: The Surprising Power of Ideas That Don’t Make Sense, which gets into these concepts in greater detail. Moreover, I highly recommend the book if you haven’t read it. Here are a few things we discussed.

Dare to be trivial.

Among Sutherland’s 11 rules of succeeding with nonsensical ideas, is the idea that small things can have a massive effect. Sutherland says this concept ties into the idea of magic. By magic, he doesn’t mean pulling a rabbit out of a hat. Sutherland means that by making a tiny (and often inexpensive) change to your experience, you can affect customer behavior in a significant way. Sutherland also refers and compares these to butterfly effects, a term in pop culture that denotes how a minor action or occurrence can have major impacts in unexpected ways. 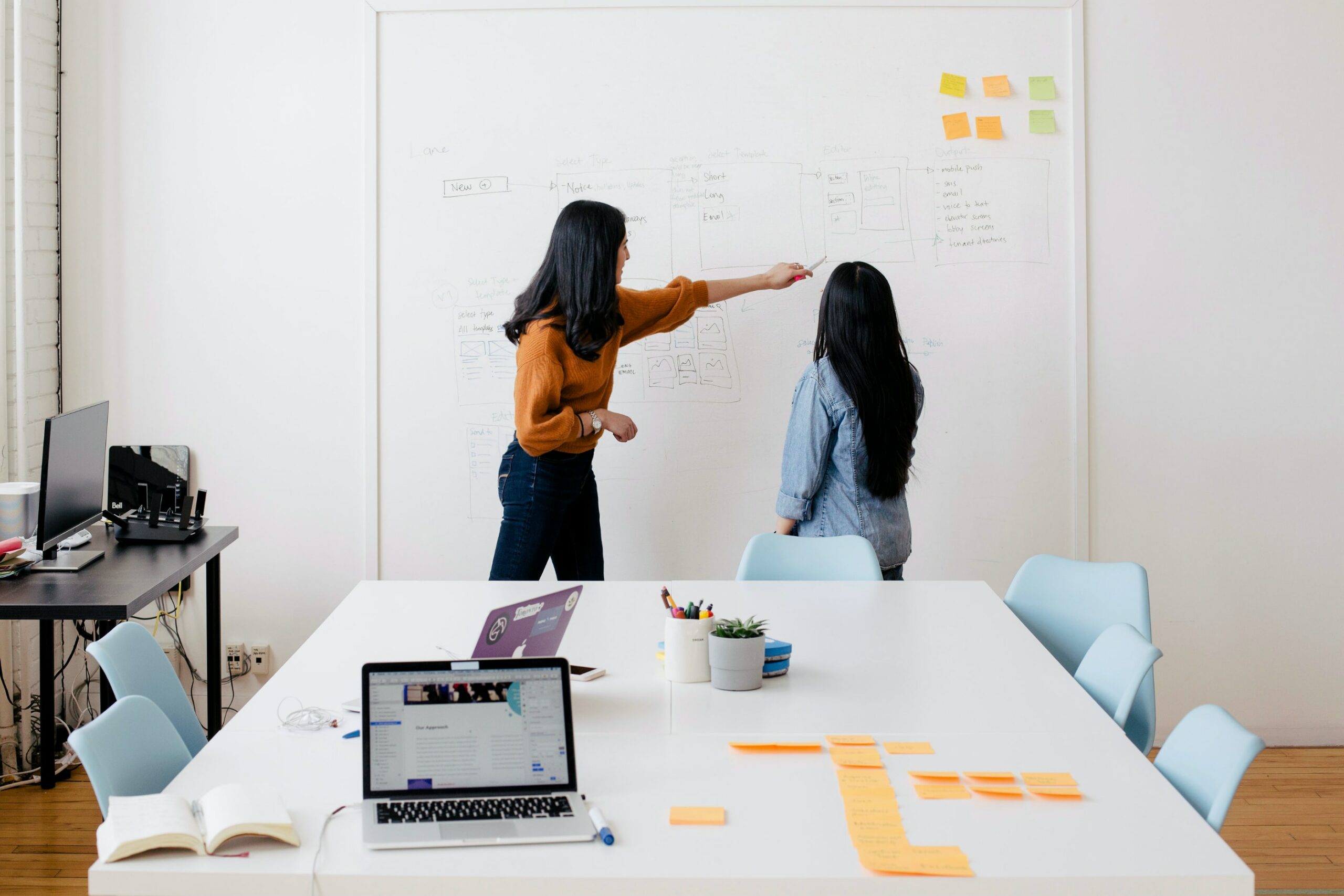 However, people don’t want to believe in magic. They like a world where to obtain a substantial effect, you must create a large and expensive intervention. The assumption is the only means to get a considerable impact is to do things differently.

In reality, Sutherland says, that isn’t true. There are opportunities to find butterflies all over the place if you intervene in a complex system at precisely the right time in the right way. Moreover, because of the nature of complex systems, you can achieve a return on investment of thousands to one.

If there is already a logical answer, we would have already found it.

Sutherland says there isn’t a shortage of people using well-established, consensus-approved models to address problems. These people are looking at things in precisely the same way. In other words, there are far brighter people than me using analytical tools. The likelihood that I can out-logic them using their devices is slim.

If you deploy a different way of thinking, the solution space broadens excitingly.

On the other hand, if you deploy a different way of thinking, the solution space broadens excitingly. A classic example would be the train service. Eurostar, an international high-speed train line in Europe, wanted to get people to go to Paris who wouldn’t otherwise go. So, how should they? Speed isn’t the answer; you can’t make a train faster than an airplane. Instead, it would help if you made train journeys more productive or enjoyable. In this case, the novelty of the train does that in itself, Sutherland explains, because lots of people went to Paris because they wanted to go on the Eurostar.

The same idea applies to cruise lines. No one says, when they cross the Atlantic in a cruise ship, that they took their family to the US for a holiday. No! They say they took a cruise to the US.

Another example, Sutherland says, is Heathrow Pod Parking at terminal 5. It’s not that it’s that big of savings from short-term parking, unlike the car park that uses bus service to get you to the terminal. It’s surprising, considering the Pod Parking is still some distance away from the terminal. Nevertheless, it often fills up, so the airport upgrades you to the short-term parking for the same rate.

However, it turns out that this upgrade was still a huge disappointment. Why? Most of the drivers that wanted to park in Pod Parking were looking forward to riding in the pod. And who can blame them?

Much more refreshing than the bus from the car park if you ask me.

So, What Should We Do?

We are all facing or entering a “new normal” as we come out of the pandemic. Undoubtedly it’s had a massive effect on people’s psyche and behaviors. It is going to have a dramatic impact on how customers feel moving forward. Sutherland is reluctant to make predictions, except for one thing: We will end up doing a bit more of what we did during the crisis and a bit less of what we didn’t do.

Sutherland says that we get trapped in two things as humans, habits, and social norms. When a lot of people are forced to do something different at the same time, a lot of behaviors enjoy reinvention or recalibration. An example could be using Zoom for long-distance meetings. 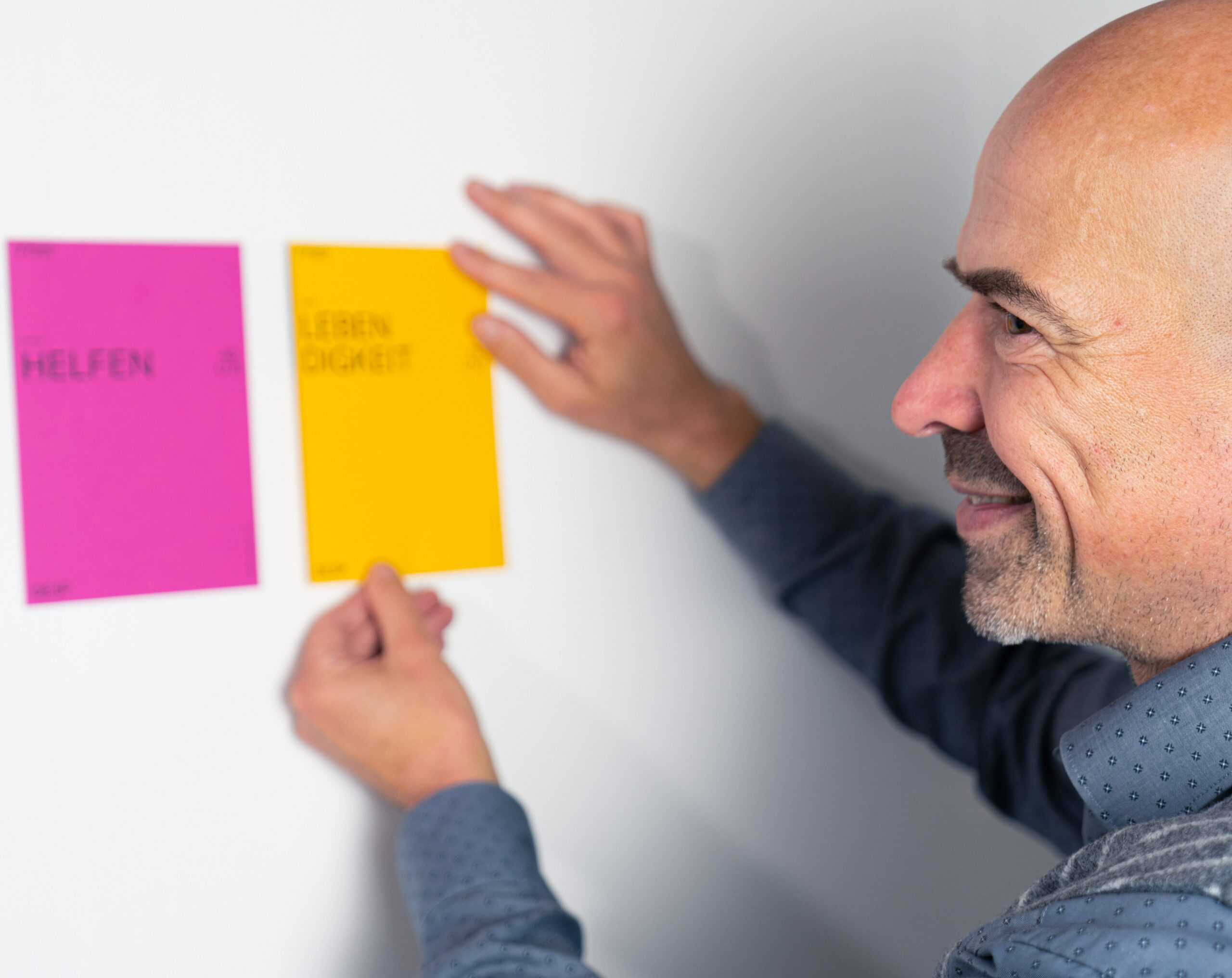 Sutherland says that what used to kill video conferencing was that the least technological person determined the video conference’s quality. If they don’t understand mute or sign in from their visit to a missile testing range, they ruin the call for everyone else. However, Sutherland says that once everybody gets quite good at teleconferencing on Zoom, the functionality is spectacular. Sutherland describes a day where he presented to 40 people in Romania via Zoom. Then, he had a meeting with three people in Atlanta and later that day caught up with a friend who lived in Australia. He jokes that a Lear jet wouldn’t be as capable as Zoom to get business done all over the world.

I imagine grocery deliveries will be carrying on as well. During the pandemic, people who had never used grocery deliveries before were trying it out during stay-at-home orders. Sutherland agrees, adding that local shops will remember who their customers are and go the extra mile for these customers. Moreover, people will rebalance towards Relational Capitalism away from Transactional Capitalism. Capitalism has over-optimized on efficiency and under-optimized on resilience, which Sutherland attributes to the fact that gains for efficiency are more comfortable with quantifying and faster to lay claim to than benefits from resilience and redundancy.

Sutherland’s next book will be about is the tradeoff between the need for certainty and ambiguity avoidance. He was inspired, but what he sees in the concept of broadening the ideas past what is business-as-usual. When you’re desperate for certainty and the pretense of a single right optimal answer, the invisible price you’re paying for that certainty is that you’re constrained to a small number of solutions. Moreover, those solutions produced tend to be expensive and entail large-scale interventions.

However, if you’re prepared to be a bit ambiguous and believe in magic, it broadens your solutions set considerably. You do pay the price in that your recommendation is harder to justify and may require experimentation. But where you gain is that you broaden the solution set, giving you access to solutions that may be surprisingly inexpensive to implement.

Instead of choosing what’s measurable, quantifiable, and immediate, he encourages organizations to consider what’s fuzzy, hard-to-quantify and long-range thinking.

He would rather have organizations not make this tradeoff. Instead of choosing what’s measurable, quantifiable, and immediate, he encourages organizations to consider what’s fuzzy, hard-to-quantify and long-range thinking.

If you haven’t, I would recommend that you read Sutherland’s book and watch his TED talks. Furthermore, I would suggest that you embrace his ideas. The way he approaches problems with creativity is hard to match, in part because he has a unique mind, but even embracing the way he thinks can lead to some radically different insight. We have all been trained to use our problem-solving skills in the same way, but Sutherland uses them in a new way, and it fixes problems in a new way also. 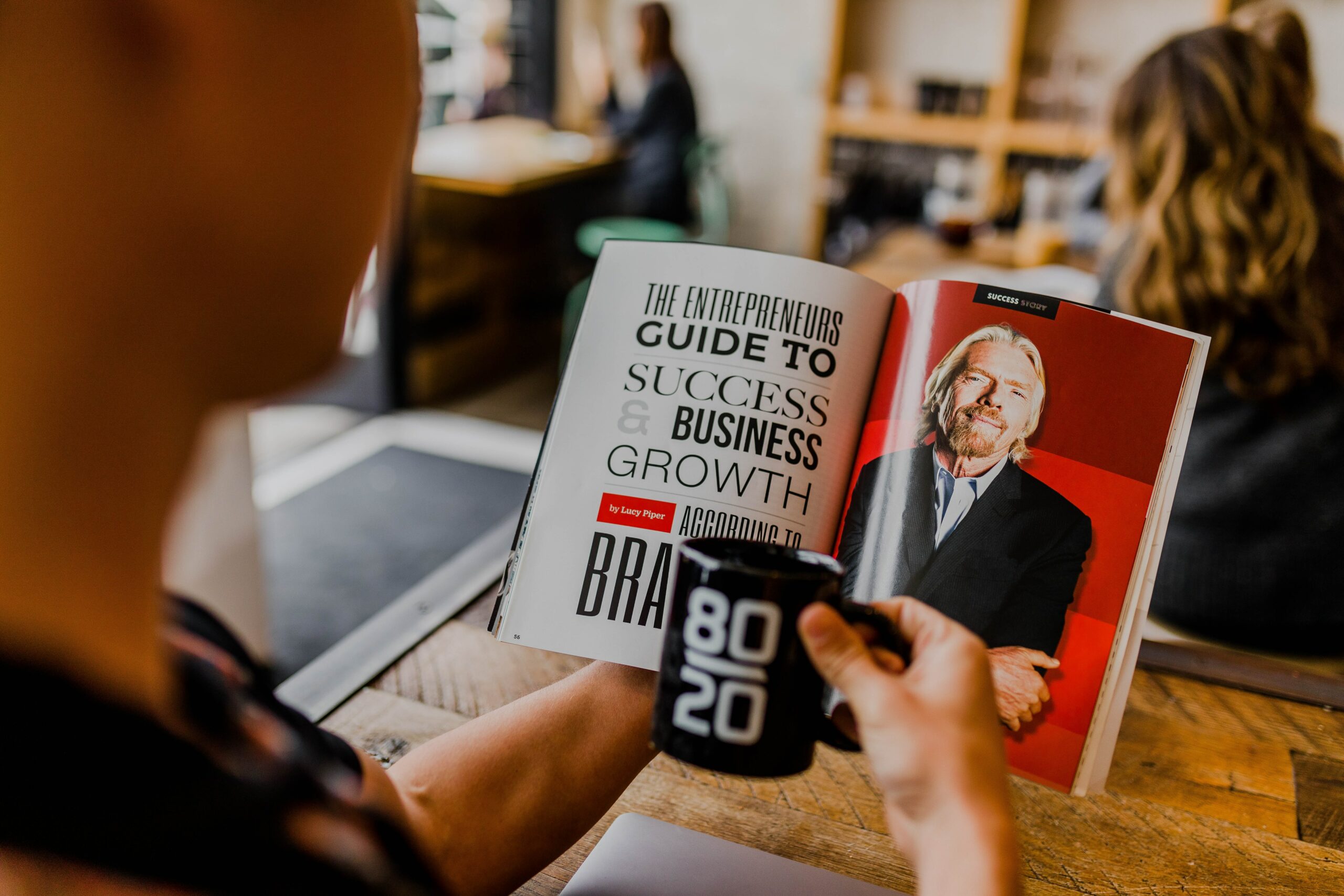 When I am speaking at conferences, I ask people to raise their hands if they think that business is going to get easier over the next ten years. Few hands go up. Sure, when you encounter these new difficulties in coming weeks, months, and years, you can approach them the same old way you always have, or you can try new, seemingly illogical and irrational ways of solving the problems. Moreover, you might think they need to be big, but you would be surprised how often that is not the case.

Also, test these new ideas. Remember, when you are trying new illogical ideas, you don’t have to do a full implementation. You can check them first. If it doesn’t work, fine, move on to the next idea, and then, test that one.

One last important thing to remember, you must get more people in your organization to embrace these ideas. If that means you start giving them this newsletter or forward them our podcast (or even the podcast summaries), then great. However, if you don’t have people in your organization that share your ideas about what will work, you will have a harder time getting your ideas across.