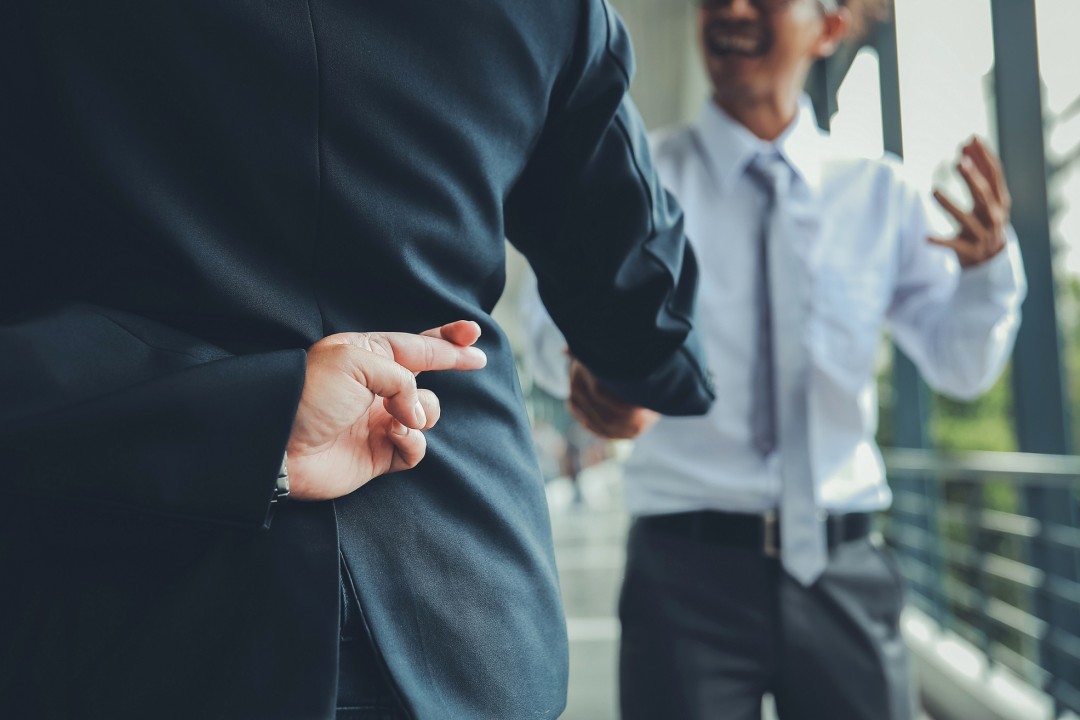 I have had a friend for 30 years who is great to be around, the real life of the party. However, you can’t believe a thing he tells you. Despite this fact, we like him a lot and enjoy his company. Lying is not excellent behavior, but everyone does it. From white lies to spare feelings to great big whoppers that deceive people for ulterior motives, lying is a part of life and, unfortunately, Customer Experiences.

As we discussed on a recent podcast, lying has a few different types because people lie to others but then also lie to themselves. Nir Eyal, author, consultant, and investor, created a two-by-two framework into different lying categories. On one axis, you can see two different audiences, other people or yourself. On the other axis, you can lie about facts or your values. This framework creates the four types of liars: deceitful, delusional, duplicitous, and demoralized, depending on who they are lying to and what they are lying about. The idea of dividing different types of deceptions helps us understand why people lie and when people lie.

Some research ties those two types of deception together—or at least shows how one influences another. Dan Ariely, the author of Predictably Irrational, spent the last several years digging into honesty and deception and figuring out why people lie. He argues that the primary framework we use to understand lying is a tradeoff between risks and rewards, meaning we weigh what we get out of lying versus the risks we take in doing it. Ariely added there’s the self-deception part that comes into it, too, which I will explain in a moment.

In many of his experiments, Ariely would give people opportunities to lie, and then they would receive various payouts for those lies. So, for example, participants roll a die, and every time they rolled a five, they received some reward. He would either have the research assistant watch participants roll or have participants self-report. Unsurprisingly, when unchecked, people lied.

As the payoffs increased, the “economic-trade-off model” predicted that people would lie more and more. However, that didn’t happen. As the gains increased, people were more honest, surprisingly. The researchers suggest this has to do with self-deception. We can lie a little bit and still deceive ourselves into thinking that we’re a mostly honest person. But as soon as we lie and get a significant reward, we can’t lie to ourselves anymore. We have to face the reality that we’re cheating, and we don’t like to think of ourselves in that way.

Nevertheless, the capacity that we have to lie to ourselves is vast. Many times, people get caught out lying and then try to bluff their way out of it (e.g., politicians). There are euphemisms for lying politicians. We use a phrase in British politics, “being economical with the truth.” In the states, we say “alternate facts.”

However, there are also cases where we rewrite our memories of the event, and believe the lies we tell ourselves. Moreover, we apply some form of altruism, like we are lying with the best of intentions.

Lying To Your Customers Is Not A Good Idea

Before diving into the area of lies and Customer Experience, let me start by saying I do not advocate lying to customers. You shouldn’t lie. It would be best if you told your customers the truth as early as you possibly can. It will help manage their expectations.

There are many opportunities for presenting accurate information in misleading ways. Those that do lie in Customer Experiences do so for two reasons:

One might argue that using Framing in your messaging is being economical with the truth, too. Framing is the way you articulate something about your product or service. Framing also requires equivalency. For example, you could say ground beef is 75 percent lean or 25 percent fat. Or that a surgical procedure has a 95 percent success rate or a 5 percent failure rate. That’s equivalent information about the product or service. Either way you look at it, framing offers the opportunity to deceive or obfuscate the truth.

Another justification for lying is to get your foot in the door. For example, many people put an outstanding picture on their dating app profile (or even a fake, in some cases). However, the image gives them a chance with people who might not have chosen them if they saw an authentic representation of their looks. Unfortunately, it rarely ends well. At some point, the two dating app users will meet, and at least one of the two will feel duped. No one likes the feeling of being tricked.

Another justification is lying to avoid conflict. Many years ago, my podcast partner published a paper about this topic. He put people in a negotiation setting where each person only had some of the information, and they had to negotiate an outcome. However, they set up the negotiation so it was irreconcilable. The researchers varied the amount of rapport they felt with their negotiating partner. Sometimes they got to know each other first; in other situations, the negotiation took place strictly via text message versus meeting in person. When people had higher levels of rapport, they were more dishonest towards that person to reduce conflict. The participants wanted to save the other person’s feelings. This example shows where good motives of wanting to minimize conflict can lead to not telling the truth.

We are also more likely to tell these little white lies to family members to smooth things over. When we have conflicting goals, we run into problems. You’re afraid if you told them the truth, it would hurt their feelings. It goes back to these small lies that we can tell that allow us to still be in that gray area. If we can justify a lie, then we can still see ourselves as being an honest person, but an honest person who tells some lies.

Imagine that you’ve been working for a company for a long time and need some office supplies at home. So, you stop by the office supply closet on your way home, grab some pens and a notepad, toss it in your bag, and then head on out. Is that dishonest? Well, it depends on the policies of the company, I suppose. You are taking stuff from the firm, but for many people, that would feel OK and not a big deal.

Now suppose you are walking by the executive assistant’s desk, and there was petty cash on it. Do you take a few bucks to buy office supplies on your way home? Probably not. Even if the dollar equivalent of the amount that you were taking in both those cases is the same, taking money feels like stealing to most people. Moreover, it is difficult to tell ourselves that we’re honest if we steal cash. But if we steal a notepad, that doesn’t feel as bad. It’s about how we can deceive ourselves with the stories we tell ourselves.

I am a useless liar. There is an old saying, “one lie begets another ten.” When you start lying, you end up drawing this incredibly complex labyrinth of lies and trying to keep track of them. I don’t bother because I don’t particularly appreciate how it feels, and I’m not good at keeping it straight.

Some people are good at it. Some are more convincing than others. You can pick up all those types of signals through micro-expressions, like raising an eyebrow or the dilation of your pupil and things like that, but unless you have the training, you don’t necessarily see that. Also, if you feel closer to somebody, then you tend to believe them more and feel like that they have your best interests at heart. Many good liars are also people who are very skilled at making you feel special.

So, What Should You Do?

You must build trust with customers. To do that, you should align what you say and what you do. If you break customers’ trust by lying, it’s tough to get it back. You would need to improve things so many more times to build that level of confidence up again. It doesn’t take a lot of deception to ruin trust, either. Being honest nine times means nothing if you lie the tenth time and destroy the trust. So, our first advice is not to lie to customers. It doesn’t lead to anything good.

Next, recognize that we lie to ourselves and do so easily and often. I heard an interview on the radio after the 2008 stock market meltdown with brokers at a bar on Wall Street after the US government bailed them out. This reporter asked the brokers if they felt guilty that the taxpayers bailed them out after their unethical behavior. Everybody the reporter spoke to said no. It reminded me of con artists who say that victims who are dumb enough to fall for the con deserve what they get.

The best advice I’ve ever heard about honesty and lying is that if you feel like something is wrong, take those initial impressions seriously. If you let yourself justify your actions, you can talk yourself into all kinds of unethical behavior and still consider yourself an honest person. You are avoiding self-deception by leaning on your intuition. If something feels uncomfortable, stop there.

From a customer perspective, trust is critical. You only build trust up by what you do and what you say—and the two things need to match. You should be honest with customers and manage their expectations. At the beginning of a sale, be honest with a customer about what the products or services can do and what they can’t do. I think that builds trust.

Moreover, while it’s sometimes difficult to tell customers terrible news, you must tell them. If you don’t and they catch you in a lie, then your credibility is shot to hell. Remember, at the other end of your lie is a person trying to work out whether they can trust you.

Lying is a part of life. We all have done it for different reasons and with different outcomes. I would tell you not to lie, but I am a realist who has lied a time or two myself. Instead, I would encourage you to save your lying for the times when you need to spare someone’s feelings rather than when you are trying to manage a Customer Experience. Customers, like everyone else, don’t like being lied to or even firms that are economical with the truth. Moreover, it can hurt your economics when you present alternate facts to customers, and all the justification in the world won’t make you feel OK about that.

Colin ShawHow Good a Liar Are You Really? Does Lying Affect Your Customer Experience?05.21.2021