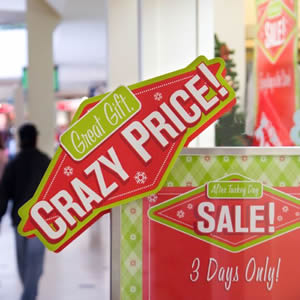 Does making employee’s get up early and have long exhausting days create the best Customer Experience on Black Friday? What about if  you move it back to Thursday, Thanksgiving Day?

It’s the most wonderful time of the year for retail.  Most retailers make their year in this time between Thanksgiving and New Year’s. It has traditionally always kicked it off on the Friday right after Thanksgiving, referred to by media and retailers alike as “Black Friday.” But this year, some major retailers are kicking it off a little early…like right in the middle of Thanksgiving dinner.

Now, honestly, as a Brit, Thanksgiving isn’t exactly my holiday. I mean, I am descendant of the blokes that chose to stick around in the tyranny of the monarch. But I do recognize that this is an important day in American tradition celebrated in the form of an annual feast meant to represent the generosity and cooperation between early settlers and the native people that were here first.  I can see that sullying it with low prices on merchandise is not exactly the idea the holiday is trying to promote.

Black Friday earned its name somewhere around the mid 70s, early 80s. It represents the day in which retailers officially begin to turn a profit, or were officially, “in the black.” This most closely resembles Boxing Day Sales throughout the Commonwealth. Usually retailers have extreme discounts and open extremely early for the overly enthusiastic shoppers that are lined up, and sometimes encamped, outside. Recently, the start time moved from 6am, back to 5 am, then 4am, until a few years ago, it changed to midnight. It was only a matter of time before someone moved it back onto the actual Day of Thanksgiving. And who else could you expect to do it, but the world’s biggest retailer, Wal-Mart?

In 2012, Wal-Mart was the first to move the start time officially to the Thursday of Thanksgiving. This prompted the first outcries from employees who were not excited about cutting their holidays short to report to work. Other major retailers followed suit, including Target and Kmart, opening on Thanksgiving Day. For the past two years, online petitions and strikes have protested the move to maximize the profits that the season affords these retailers at the expense of employees’ holiday. In addition to the protest of the employees that now have to work, critics don’t appreciate the commercialization of yet another national holiday.

Some stores are responding to critics, by remaining closed on Thanksgiving and enjoying some great PR as a result. Many major retailers, many of them household brand names, have opted to be closed on Thanksgiving citing “tradition” and encouraging their employees to enjoy their families and friends this year.

Costco, Nordstrom, Barnes and Noble, to name a few, are some of the retailers that have opted to close for the holiday. Ironically, Sam’s Club will be closed on Thanksgiving, even though it’s parent company Wal-Mart will have it’s flagship stores open. BJ’s Warehouse, is touting their Family-friendly policy of “bucking the trend” by remaining closed on the holiday.  Patagonia, another large brand, is also messaging an allegiance to “tradition” by keeping its stores closed on Thanksgiving.

I wonder if you are an employee who had to miss Thanksgiving dinner so that harried shoppers can clamor for reduced prices on merchandise, how likely are you to uphold the standards your employer has for customer service?

A key element to any customer service design is to create employee engagement.

“Great Customer Experiences are enabled by inspirational leadership, an empowering culture and empathetic people who are happy and fulfilled.”

Decisions to take away a national holiday from your employees, that many have celebrated since they were born, is not a good step to creating employees that are either happy or fulfilled.

The move by retailers to push back the start of their most profitable season is most like an English holiday icon that I have known since I was a child: Ebenezer Scrooge.  The disgruntled employees on picket lines and signing petitions online are more confident Bob Cratchett’s, asserting their power. Time will tell if the major retailers who ignore their disgruntled Cratchetts will get a lesson from consumers this year akin to the one Scrooge learned in the fateful tale, or if they will they be counting their profits well into the new year, made on the ruined dinner plans of families all across the nation.