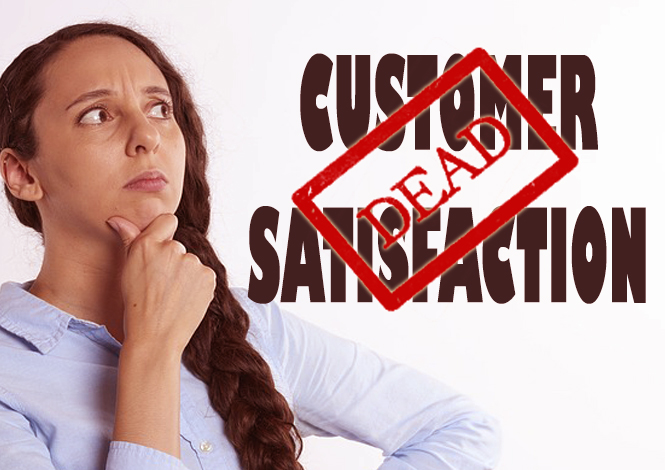 In the movie ‘Gladiator’, corrupt Emperor Commodus puts Maximus, the gladiator/general who is his enemy, into the Coliseum with a former champion and several huge tigers. Commodus’ goal is to assure Maximus’ death in front of thousands of spectators. To Commodus’ dismay, Maximus defeats them, angering the Emperor by sparing the life of the former champion. Entering the arena, Commodus dejectedly says to Maximus: “What am I going to do with you? You simply won’t…die.” Customer satisfaction is a lot like Maximus. Though severely injured (like Maximus before killing Commodus) as a concept and metric, there are those who, perhaps with the best of intentions, are endeavoring to keep satisfaction alive.

Maybe this is because ‘customer satisfaction’ is such a ubiquitous phrase that it’s thought to be a standard for understanding behavior and designing experiences. Maybe it’s just analytical complacency. Whatever the reason(s), customer satisfaction isn’t dead, but it is badly infected and impaired with very serious conceptual and interpretation issues – and, like a mortifying wound, has had those issues for some time. While creating a strong and positive emotional connection between customer and supplier is, indeed, a foundation of customer loyalty behavior and an extended customer life, those labeling ‘satisfaction’ as an emotion, or conflating satisfaction to be an emotional factor to interpret decision-making and behavior, are, from my perspective and with ample proof, doing little more than putting a small Band-Aid on an injury that can never heal.

In customer experience, satisfaction is more a state of benign calmness or passive quietude which is the result, or product, of some relatively neutral emotions and, in and of itself, doesn’t apply very well as either a precursor to learning more about behavior or as an emotion. Webster’s Dictionary, for instance, defines ‘satisfy’ as, “To make content or appease, to fulfill requirements.” It’s a result or an outcome, rather than an emotional driver. Here are several pieces of content to support this point of view.

To begin, an August, 2016 article in Harvard Business Review by Alan Zorfas and Daniel Leemon, titled “An Emotional Connection Matters More Than Customer Satisfaction” (https://hbr.org/2016/08/an-emotional-connection-matters-more-than-customer-satisfaction) They state: “Our research across hundreds of brands in dozens of categories shows that the most effective way to maximize customer value is to move beyond mere customer satisfaction and connect with customers at an emotional level – tapping into their fundamental motivations and fulfilling their deep, often unspoken emotional needs. That means appealing to any of dozens of ’emotional motivators’, such as a desire to feel a sense of belonging, to succeed in life, or to feel secure.” Satisfaction is not identified, either as an emotion or a summary emotional factor. Their conclusion: “On a lifetime value basis, emotionally connected customers are more than twice as valuable as highly satisfied customers.”

A slightly earlier HBR article by Zorfas, Leemon, and Scott Magids (“The New Science of Customer Emotions”, November, 2015) presented, if anything, even more compelling evidence of how satisfaction and emotions are different, and why emotional brand connection should be the goal: “Across a sample of nine categories, fully connected customers are 52% more valuable, on average, than those who are just highly satisfied.”

Let’s go a little further back in time.

A paper by Nicole Koenig-Lewis and Adrian Palmer in the Journal of Marketing Management from about a decade ago, ‘Experiential Value Over Time – A Comparison of Measures of Satisfaction and Emotion’ (http://www.tandfonline.com/doi/abs/10.1362/026725708X382064) saw profound differences between emotions and a state of satisfaction. What they found is that, if the litmus test for satisfaction is how well it drives behavior, then it doesn’t hold up very well. “There is evidence that measures of satisfaction are poor predictors of repeat buying behavior, and this may be due to their failure to adequately incorporate an affective element.”

Back still further, well before the New Century.

Fred Reichheld, in a 1993 Harvard Business Review article (“Loyalty-Based Management”, March-April, 1993, p. 71) said.”While it may seem intuitive that increasing customer satisfaction will increase retention and therefore profits, the facts are contrary. Between 65 percent and 85 percent of customers who defect say they were satisfied or very satisfied with their former supplier.” This is not much of a recommendation.

At about the same time, Christopher Fay, writing in the Winter, 1995 issue of the Juran News (“Can’t Get No Satisfaction? Perhaps You Should Stop Trying”) stated: “Why would it be that so many would continue to vigorously espouse and relentlessly pursue a metric – customer satisfaction – not at all clearly tied to profit improvement? It would seem that most managers assume satisfaction scores to be positively correlated with customer behavior, i.e. results…..In point of fact, this assumed correlation between what customers say and what they do has been disproved in the vast majority of businesses studied.” Satisfaction is benign, passive and functional, and connects poorly with behavior.

Back even further, to the era of Total Quality Management.

In his classic 1982 TQM book, Out of the Crisis, W. Edwards Deming, the late internationally-renowned quality expert, identified satisfaction as an insufficient state of acceptance, saying: “It will not suffice to have customers that are merely satisfied. An unhappy customer will switch. Unfortunately, a satisfied customer may also switch, on the theory that he could not lose much, and might gain.”

Through numerous studies, there is considerably more, of course; but these examples recognize that satisfaction doesn’t qualify as, or equate to, an emotion which reliably drives customer decision-making and behavior. Further, as supported by Deming, Reichheld, and many, many others, customer satisfaction is more a leap of faith that this condition will equal positive marketplace behavior, and that a company focused on satisfying customers can consider itself on safe ground.

In sum, there is historic recognition that satisfaction is more about being in a state of benign, passive acceptance of a result (transactional or relationship) than an emotion which impacts or causes action, per se. Considered in human terms, satisfaction isn’t dead, but it may qualify as a zombie or vampire. The suggested, real-world, actionable replacement: emotionally-driven value (EDV).

Republished with permission from CustomerThink.com